In light of recent high profile suicides, and my own battle with depression, I’d like to share this book review. And I’ll probably be adding it to my TBR pile. As a person who knows what depression feels like, it is sometimes difficult to read about it, but I think I may have to on this one. 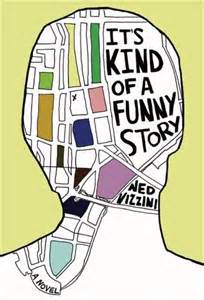 Ambitious New York City teenager Craig Gilner is determined to succeed at life – which means getting into the right high school to get into the right job. But once Craig aces his way into Manhattan’s Executive Pre-Professional High School, the pressure becomes unbearable. He stops eating and sleeping until, one night, he nearly kills himself.

Craig’s suicidal episode gets him checked into a mental hospital, where his new neighbors include a transsexual sex addict, a girl who has scarred her own face with scissors, and the self-elected President Armelio. There, Craig is finally able to confront the sources of his anxiety.

Ned Vizzini, who himself spent time in a psychiatric hospital, has created a remarkably moving tale about the sometimes unexpected road to happiness.

Vizzini grew up primarily in the Park Slope neighborhood of Brooklyn in New York City. He attended Stuyvesant High School…